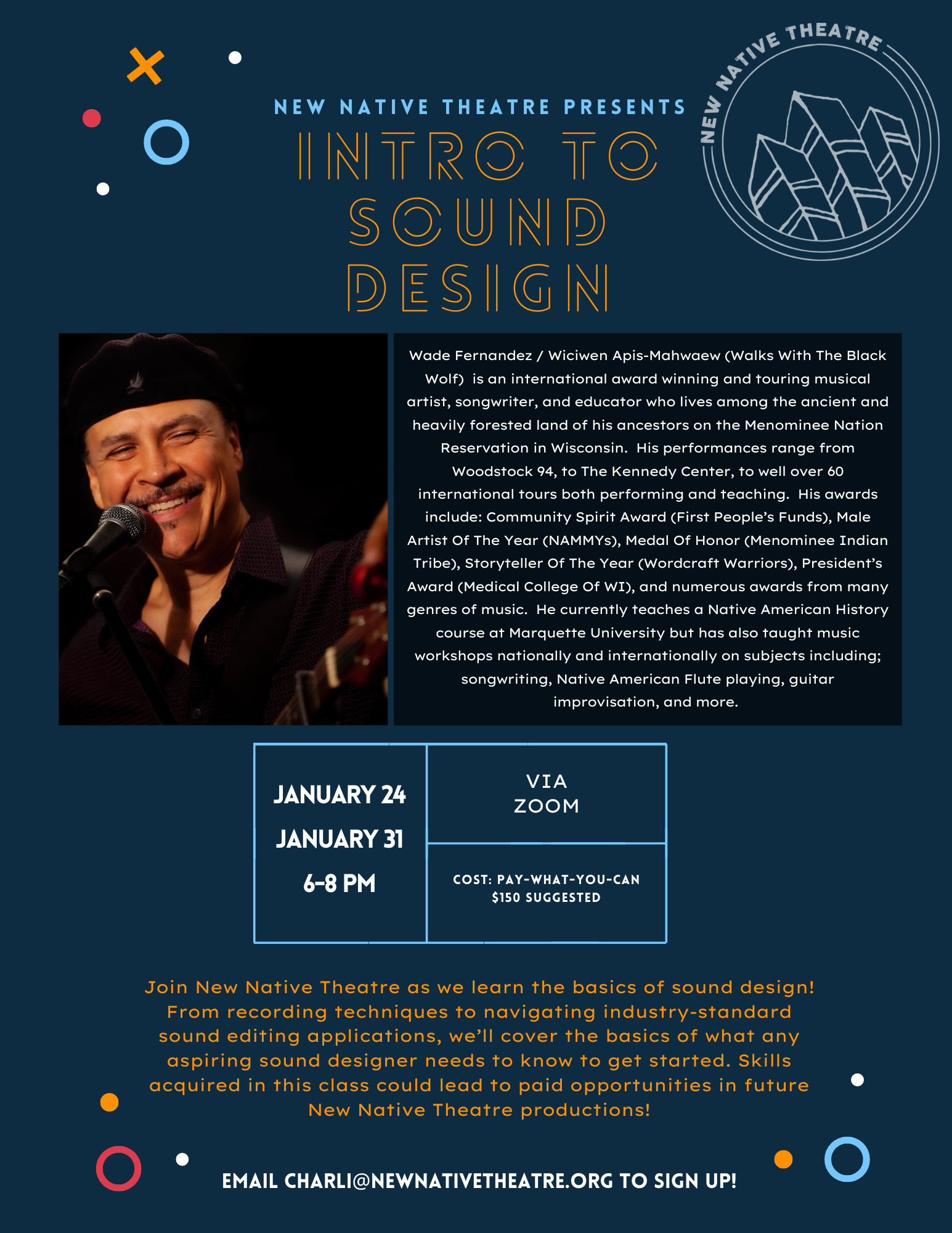 Tuition for our classes is pay-what-you-can, with the suggested price of $150. To sign up, send an email to charli@newnativetheatre.org. 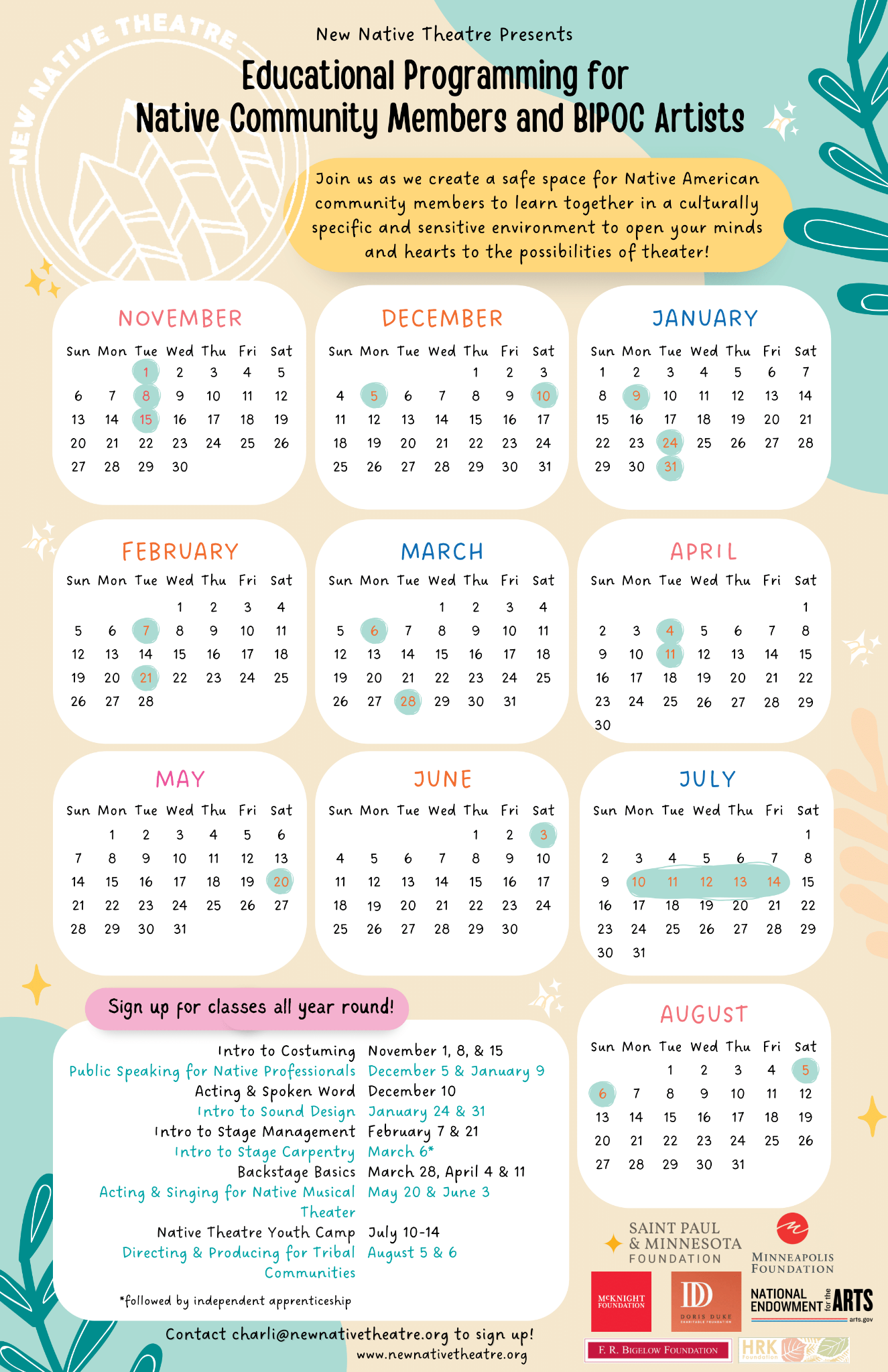 Maya Washington is a filmmaker, author, performing artist, and educator whose work has garnered fellowships and awards. She holds a BA in Dramatic Arts from the University of Southern California, and an MFA in Creative Writing from Hamline University. She currently serves as the Artistic Director of Youth Performance Company. Her sports documentary and memoir by the same name, Through the Banks of the Red Cedar, about her father Minnesota Vikings and Spartans football legend Gene Washington and the desegregation of college football at MSU. The film debuted on the Big Ten Network (2020) and is currently available on PBS platforms, itunes and Comcast (2022). Her debut memoir by the same name is widely available in bookstores from publisher Little A (2022). Her recent work includes directing episodes of History Channel’s “I Was There” and Fox’s “The Killer Next Door,” from production company Committee films. Maya’s award-winning narrative short films CLEAR and White Space, are now streaming on Argo (CLEAR) and Kweli TV (CLEAR, White Space). White Space (starring ABC Family Switched at Birth’s Ryan Lane) aired on network television and was nominated for a Black Reel Award in addition to others. Her work in the community includes creative support for George Floyd Global Memorial and Emmett Till Legacy Foundation.

Erin Gustafson is a Theater Technician (Carpenter, Stage Manager, Electrician, and Painter) and Teaching Artist based in Minneapolis. Currently they are the Lead Carpenter at Park Square Theatre and the 2022-2023 Season Stage Manager at Youth Performance Company (YPC). Erin received her Bachelor’s Degree in Theatre Arts from Carleton College in 2019 and has been involved with YPC as a stage manager since her graduation. In 2021 they became a teaching artist at YPC as well. Since then, Erin has taught numerous classes focused on creative play, imagination, and collective creation.

Khamphian Vang (she/her) is a Twin Cities based freelance designer-artist with a background in fashion, theater, and costume design. She approaches each project as an opportunity to give visual voice to the characters and elevate storytelling through emotive and symbolic design. She has designed for multiple productions at Full Circle Theater Company (Caught; The Empathy Project; Atacama; Fire In The New World) and a virtual show with Walking Shadow Theatre Company (Reboot). Credits with Theater Mu include peerless, multimedia installation for Shine A Light at Jungle Theater, Man of God, and most recently, Cambodia Rock Band. Khamphian has worked on Chicago, Sense & Sensibility, and Mamma Mia! at Apple Valley High School as a designer and mentor. She is excited to have this opportunity to share her craft at New Native Theatre.

Nicholas “Nick” Metcalf, Cetanzi (Yellow Hawk), MSW, is an enrolled member of the Rosebud Sioux Tribe – Sicangu Oyate (Burnt Thigh People).  Nick is faculty in the Social Work program at Metropolitan State University, St. Paul and graduated this summer 2014 with a Ph D from the University of Minnesota in Organizational Leadership, Policy, and Development.  Nick is a proud parent and grandparent. Nick is a writer and a poet.

Ramon Esquivel is a playwright, director, dramaturg, and educator. He is honored to be invited into this community in collaboration with New Native Theatre. His play, ZEQ, was awarded a 2021 ReImagine Grant from Write Now, TYA/USA, and the Children’s Theatre Foundation of America. Published plays include The Hero Twins: Blood Race, Luna, Nasty, and Nocturnal, and his work is featured in four  anthologies, Palabras del Cielo: An Exploration of Latina/o Theatre for Young Audiences, Volumes 1-2, New Visions/New Voices: 25 Years/25 Plays; and I Have a Story: Plays from an Extraordinary Year. Ramón has recently directed Sometimes the Rain, Sometimes the Sea by Julia Izumi and Chatroom by Enda Walsh, and he soon will be directing Somewhere: A Primer for the End of Days by Marisela Treviño Orta. Ramón is currently Assistant Professor of Theatre – Playwriting at California Polytechnic State University, San Luis Obispo.

Wade Fernandez / Wiciwen Apis-Mahwaew (Walks With The Black Wolf)  is an international award winning and touring musical artist, songwriter, and educator who lives among the ancient and heavily forested land of his ancestors on the Menominee Nation Reservation in Wisconsin.  His performances range from Woodstock 94, to The Kennedy Center, to well over 60 international tours both performing and teaching.  His awards include: Community Spirit Award (First People’s Funds), Male Artist Of The Year (NAMMYs), Medal Of Honor (Menominee Indian Tribe), Storyteller Of The Year (Wordcraft Warriors), President’s Award (Medical College Of WI), and numerous awards from many genres of music.  He currently teaches a Native American History course at Marquette University but has also taught music workshops nationally and internationally on subjects including; songwriting, Native American Flute playing, guitar improvisation, and more.

For more info on Wade please go to his website: www.WadeFernandez.com