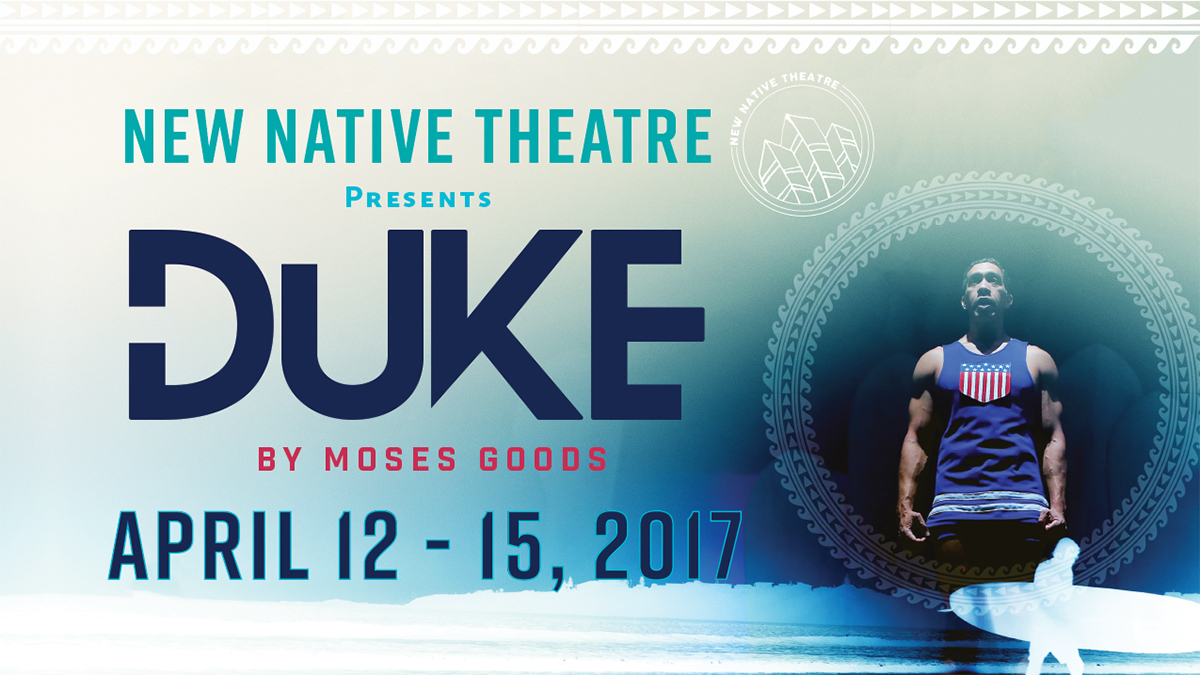 “In Hawaiʻi we greet friends, loved ones and strangers with Aloha, which means with love.
Aloha is the key word to the universal spirit of real hospitality, which makes Hawaiʻi renowned as the world’s center of understanding and fellowship. Try meeting or leaving people with Aloha. You’ll be surprised by their reaction. I believe it and it is my creed. Aloha to you.”
~Duke Paoa Kahanamoku
Moses Goods performs DUKE, April 12-15, presented by New Native Theatre.
Come experience the extraordinary life of Duke Kahanamoku, a guiding light during Hawaii’s transitional times.
Check out the event for more details.
Schedule:
Wednesday 4/12 7:30pm Performance
Thursday 4/13 7:30pm Performance
Friday 4/14 7:30pm Performance
Saturday 4/15 2:00pm Matinee
Saturday 4/15 7:30pm Performance
School groups: Ask about the Wednesday 4/12 10:00am Special School Matinee.
Tickets can be found at Brown Paper Tickets and are available at the time of performance.
$25 or Pay As You Can.
Location:
Open Eye Figure Theatre
506 E 24th Street, Minneapolis, MN 55404
About DUKE:
Hawaii’s first Olympic gold medalist and the father of modern surfing, Duke Kahanamoku is unquestionably one of the most important and beloved figures in Hawaiian history. Duke lived through Hawaii’s transition from an independent Nation to a U.S territory and on to statehood. In many ways his extraordinary life served as a guiding light for Hawaii’s people in their struggle to find identity in a changing world. Known for his humility, kindness and love of community Duke’s fame and renown made him a role model and source of inspiration for all.
Moses Goods (Playwright and Performer):
Moses is one of Hawaiis most prominent theatre artists. Originally from the island of Maui, he is now based in Honolulu and travels nationally and internationally performing his original work to a wide range of audiences. Moses has done extensive work as a company actor with the renowned Honolulu Theatre for Youth. Other professional theatre involvement includes principal work with the long-running production Ulalena and staring in the one-man show The Legend of Kaululau. For his creation of the play Duke, a one-man show that he both wrote and stars in, Moses was awarded with a certificate of appreciation by the United Nations Association of the United States of America HONOLULU CHAPTER. In addition to Duke, his professional writing credits include Lonos Journey produced by Honolulu Theatre for Youth and three full length plays commissioned by Windward Community Colleges department of theatre and dance. Moses also writes his own storytelling material adapting traditional Hawaiian stories to his unique performance style.
In 2012 Moses was awarded a MicroFest fellowship by the Network of Ensemble Theatres. As a MicroFest fellow he was given the opportunity to visit several major U.S cities in distress to observe how art is being used to help remedy social issues. This eye opening experience both broadened his social awareness and greatly impacted his work as an artist in that it showed him how important it is for all people to tell their stories. Moses also studies traditional hula under Kumu Hula Mpuana de Silva of Hlau Mhala Ilima.